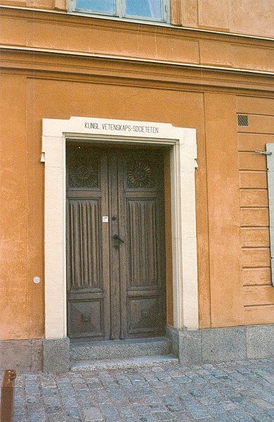 The port to the Society building. (© Wikipedia/Celsius)

In the seventeenth century scientific thought based on observation and experiment gradually became the foundation of knowledge acquisition, making the old Aristotelian natural philosophy yield. At the end of the same century there was a person in Uppsala who during his journeys through Europe had met Leibnitz and had been impressed by the academy, Preussische Societät der Wissenschaften, that he had founded in the same spirit that gave rise to also The Royal Society in England and L’Académie des Sciences in France. This man was Erik Benzelius, the Younger, university librarian, who was a theologian with wide-ranging interests in science and technology. Erik Benzelius was the brother-in-law of the later on illustrious Emmanuel Swedenborg, who, in his turn, for a long time worked close to the great engineer and inventor Christofer Polhem.

Ever since his European journey, Erik Benzelius had nourished dreams of initiating a learned society also in Uppsala. However, these plans were not easy to realize, but in 1710 the opportunity arrived that made them possible. These were hard times: the King was losing the great war south, the bubonic plague struck which made the University Council close the university and send the students home. The university teachers thus had no teaching duties; Benzelius gathered a handful of the most prominent scholars at the library. As a result, the group decided to meet regularly, to correspond with colleagues abroad, to collect information of curious phenomena and to try to understand their cause, and to collect and systematize nature-history objects. They also decided to actively broaden and pass on knowledge in astronomy, physics, and technology, fields in which the practical prospects were noticeable. This became the origin of what at the end of the 1720s came to be called the Royal Society of Sciences at Uppsala.

In contrast to the university of that time, which primarily was an educational institution, the Society came to act the role of an institute for research and development in a broad sense. As early as the first years of the 1730s, the Society financed Linnaeus’s Lapland journey and, together with the French Academy of Sciences, it supported the famous expedition to Torneå a few years later when the figure of the Earth was established to be oblate. In addition, it was instrumental in erecting Anders Celsius’s astronomical observatory, a building still standing in the center of Uppsala. Since then the Society has in numerous ways played a significant part locally, nationally, and internationally.

As early as the 1710s the first Swedish journal of science, Daedalus Hyperboraeus, was published at the initiative of Emmanuel Swedenborg. This series was succeeded by several others, and since 1773 Nova Acta Regia Societatis Scientiarum Upsaliensis is published, in the first issues of which may be found many very significant science articles, such as Torbern Bergman’s account of Carl Wilhelm Scheele’s discovery of oxygen. The publication series Nova Acta came to play an important role as a medium for Uppsala science as late as the 1960s when the structure of science publication drastically changed.

The Society is still important for the exchange of thought, not the least when it comes to contacts across the disciplinary borders and across generations. In the same way that universities and university colleges have assumed an increasingly regional character in recent years, learned societies such as the Society have strengthened their significance as contact points between faculties and disciplines.

Since the beginning of the nineteenth century donations have made it possible for the Society to award prizes to primarily young scholars, delivered once a year at a public ceremony.